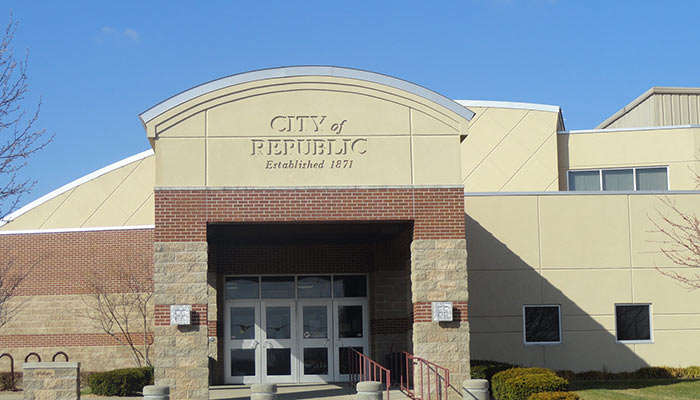 Republic is a suburban community west of Springfield.  Republic started out as a railroad community in its early years and is now a thriving self supporting community with lots of shops and restaurants for the local residents.

Republic in the early years as a small crossroads community for early settlers heading west.  After the Civil War ended the Frisco Railroad was built through Republic and the larger market center of Little York.  The citizens of Republic asked the Frisco Railroad to build a depot, the Frisco Company refused until Mr. Noe, a local citizen, raised subscriptions totaling $1000 dollars to offset the cost.  After the depot was built, Republic began to grow quickly and soon became the leading market center for the area south west of Springfield.  Little York eventually gave way to Brookline, which consolidated with Republic in 2005.

With the rapidly expanding population there have been several new housing developments full of amenities.  The housing in Republic is mostly suburban with some older farms on the edges of town.

The first Saturday each October, the city of Republic hosts Pumpkin Days, a throw back to Republic’s farming roots.  Venders come in to show off fall arts and crafts and families gather to celebrate the fall harvest like so many generations before them.  In July Republic celebrates the 4th with Have a Blast with live music, great food, and of course the spectacular fireworks display.  For a safe Halloween, Republic annually hold treat Yourself in the Park, providing a safe alternative for trick or treating.

Wilson’s Creek National Battlefield is located just south of Republic High School. This is a national park for the Battle of Wilson’s Creek, the second major battle of the Civil War and the first west of the Mississippi.  The Wilson’s Creek National Battlefield has one of the best preserved battlefields in the country and has on site is a museum that houses one of the best collection of Civil War artifacts in the nation.  There is an 8 stop self guided drivable tour, visiter center and book store, the Hulston Library, and special learning events throughout the year.

With great local parks, family festivals, employment opportunities, and so many housing options, it is easy to see why Republic has grown by 75% since 2000.

Search for Real Estate and Homes in Republic, MO